The term gained momentum after Holland and Miller (1991).

An agent in such a system is adaptive if it satisfies an additional pair of criteria:

A complex adaptive system, then, is a complex system containing adaptive agents, networked so that the environment of each adaptive agent includes other agents in the system.

The Ansazi Project: Replicating History with an Artificial Society

If you didn’t grow it, you didn’t explain its emergence (Epstein, 1999)

In a self-organizing system order is not imposed from the outside, by external influences. No architect or foreman holds the blue-print or has a preconceived idea about what patterns will evolve. The patterns that arise are emergent properties, properties that cannot be predicted simply by examining the subunits in isolation. To understand them, the dynamic and often remarkably complex interactions among the subunits must be taken into account.
Camazine 2003, Natural History

The Zebra‘s pattern is the result of a localised biochemical process and can easily be replicated with a cellular automaton, the precursor of agent-based models.

Goals of an Agent-based Approach to Archaeology

Pure agent-based computational economics (pACE) is the representation of economic theory by means of an agent-based model that embraces the concepts of ontology, epistemology and systemism.

Agent-based modelling is a simulation method that:

he ontological concept entails the representation of:

The epistemological concept entails an explicit representation of:

The systemic concept entails the explicit representation of time, action and interaction, i.e. who acts when and how does this action of the single agent influence the environment, the agent itself and other agents. 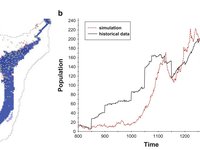